Media Tour 2019: In Regards to Ultimate 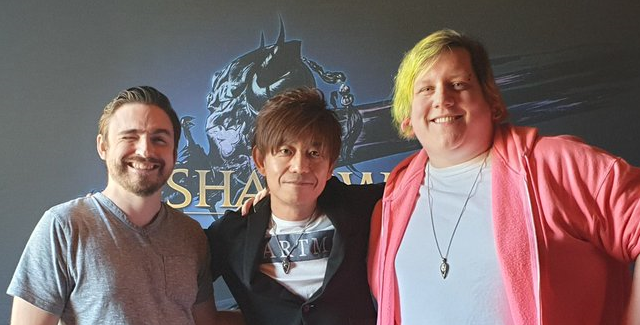 While doing the interview, I was coupled with influencer GoldenTot(Tate). Together we asked questions in regards to the future of content going into Shadowbringers. There were two questions Tate asked about Ultimate, in regards to unsyncing it and if they plan to release three in the coming expansion.

On the topic of PvE content coming in 5.0, I was curious as to the plans you have for unsyncing old Ultimate fights and what you guys plan on doing about that? Will you allow that to happen or will you have it still be an achievement later on?

So in terms of Ultimate content, we don’t have any plans to make changes to it, so we don’t have plans to raise that minimum item level nor will we be removing that unsyncing. So the value of the titles or weapons associated with that will be maintained. And in terms of Ultimate, we are making plans for the next Ultimate as well so we will be revealing information when it becomes available.

A very short and straight to the point answer. I’m sure many who earned the achievement of clearing UCoB or Weapon’s Refrain will be glad to hear the challenge will not be diminished anytime soon. After a few more questions, Tate still wanted to know a bit more about their plans for Ultimate for the expansion.

This time, Yoshida had a more in depth answer about the decision making that surrounds creating more Ultimates.

So you may or may not be aware, but when we plan for content we don’t plan it with each coming patch, it’s not as immediate as “Ok what do we do with our next patch?” It’s more about having a road-map for two years worth of content. So we plan very far in advance and that’s only because it would help determine how we pace ourselves. We’re pumping out content in a fairly systematic plan and we have that set schedule, so we have to think in advance and pace ourselves. For example, we had the Blue Mage limited job incorporated but that required for us to allocate time that we would take to develop about three patches so we have to know what we’re doing fairly early in advance or else we wouldn’t be able to execute according to schedule and still continue to have constant updates. So in terms of the 5.X series we are actually already going to have a road map decided upon by the end of June. On a side note, in terms of planning for the next expansion it usually starts at the end of August of an expansion release year so we’re already thinking about design ideas for the next expansion. So it is again a very long term planning, but we just wanted to give you that context first.

So in terms of Ultimate battles, actually with any sort of content throughout the 5.X series including the casual content, the alliance raid, 8 man raid including the Ultimate, all of that different content that goes into the game is going to fall into place or we’re going to make the schedule for that at that end of June timing. That’s when we determine how many times we’re going to have our Ultimate battles pan out. At the same time we also talk about how we want to, or where we want to take the Ultimate battle. Do we continue in this, or do we start thinking about new ideas and things like that. In Stormblood, in the Ultimate battles that were planned for that series, our plan was “Okay, we want to do it at patch 4.1, patch 4.3, and patch 4.5. The plan was to have it three times, but once we released Unending Coil of Bahamut and the reaction that we got from everybody was generally speaking “If this is gonna come out every 6 months you’re gonna kill us.” So it was a very rough world race, and I’m sure a lot of players were very tired and exhausted when it was first released. People were saying “It would be very tough on us for it to come every two major patch updates” and the development team felt the same so at that time they decided that, “Okay so I think we’re not going to do the one that was initially planned for patch 4.5 but instead reach a conclusion at 4.3.” But then once we made that decision and once that second Ultimate came out, people apparently got a little more energized and they actually expecting, “What’s the next one going to be at 4.5?” There was feedback asking for us to bring back Ultimate content at 4.5, but the development team actually felt fortunate that we decided to cancel the Ultimate content that was planned for 4.5 because we were also developing for Baldesion Arsenal and continuing work on Shadowbringers, and so had those been going on in parallel to the development of Ultimate battle content at 4.5 they were worried that either the quality of the battle at 4.5 would have significantly dropped or they may have had to decide to cancel Baldesion Arsenal so it was good that we didn’t have it.

With all of those results we are still discussing about how do we take the Ultimate series in the 5.X patch updates? I think it’s looking like we definitely want to do it twice, it’s almost decided that we will definitely have it twice, and then whether or not we do a third one is pending to see how we do in the first two. Of course, some of the dev team members want to do a third one, but the other part of the dev team mentioned that “If we were to do another Ultimate content we’re going to be doing work on our next expansion, that’s impossible.” So the discussion is still ongoing on that matter, and we don’t want to put too much of a burden on our development team to the point where there’s struggling to get the content created and we also don’t want to drop in quality either, we want to always give it our best. There’s also content to develop for the next expansion, or other relevant content. So we will first focus on our first Ultimate encounter, and then we’re hoping that we can reveal more information once we solidify things and once things get decided.

One more thing that we wanted to bring to your attention that it is very few and far between that you have a creator that can make encounter content, at that level. Even looking at developers around the world, and on the XIV team there’s only about three people who can create content like that.

So from this answer, we can conclude it’s undecided whether or not we will actually see three Ultimates in Shadowbringers. It’s completely based on whether the team believes it’s possible to create without risking the level of quality they want to produce for the other content in the game. As Final Fantasy XIV is a themepark MMO for everyone who loves the series, it does make sense other areas in the game will need attention. Especially with the level of work and detail we’ve come to expect from Ultimate fights.