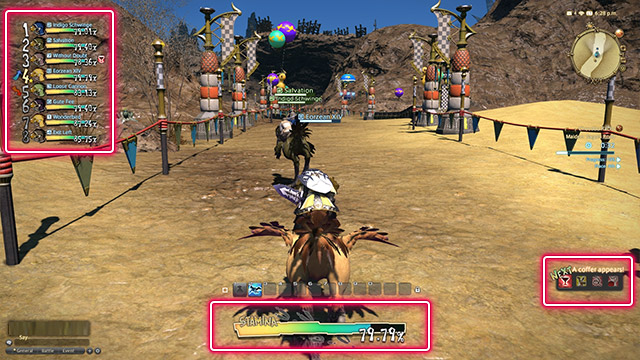 Going into this interview I didn’t want to ask purely raid or pvp related questions. There are other features in the game I’m genuinely interested in the status of. And this one in particular is even in the tagline of my show. Ever since Chocobo Racing has been implemented into the game, it’s been relatively stationary. It’s an iconic part of the Final Fantasy family of games, and I felt it deserved a little insight to why we aren’t hearing or seeing much of it. So I asked:

My next question, maybe make it a very light question this time, one thing that hasn’t received very many updates and people are curious about is Chocobo Racing. Do we expect anything in Shadowbringers to add on to new maps or anything additional to Chocobo Racing?

When I asked the question, I did get a small chuckle out of Yoshida.

So with content such as Chocobo Racing there are team members on the development team that mention “Yeah it’d be nice if we can update it soon,” but with Gold Saucer, and we mentioned about PvP, new content and updates are planned for 5.1, only because when an expansion is released, players will rush to get the main scenario quests done. They need to level main job, they need to level their alt jobs, they need to level their Disciples of Hand and Land, crafting and gathering, and then jump into the raid and that’s the kind of general flow that we’ve been observing and no one’s going to do Gold Saucer. So that’s why we want to have them focus on the content at launch and then we have the updates coming in the first major patch update. Again, just to reiterate, there is the sentiment among the development team to want to upgrade elements, not specifically to Chocobo Racing, but there is that desire to update things for our players.

There’s one issue though, the person who works on the Chocobo Racing is just one person, and he had actually moved up in the team and so he’s now working on raid content, and he’s working on those. So if we were to have him upgrade Chocobo Racing we’d have to pull him out momentarily and have somebody else handle the development of raid content which could be problematic so I think we need to find somebody who can take on and sort of pass the torch on to before we decide on making updates.

Hearing that the developer for Chocobo Racing in FFXIV has moved into a position where his attention is focused on raid content doesn’t spell a lot of hope for any updates soon. So we may need to see another developer take over Chocobo Racing before we see any updates, or have him step back to continue on with it. That being said, I wonder if he is the reason for our little friend in the most recent raid tiers.